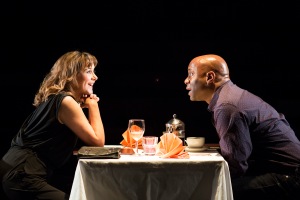 Can an Oscar-winning playwright and a former Eastenders actor succeed where placard-waving lawyers have failed, in drawing to the public’s attention the devastating impact of the legal aid cuts?

Far from the glamorous, high-octane legal world portrayed on the small screen in dramas like Silk and Judge Deed, Rebecca Lenkiewicz’s play is more mundane.

It centres on the travails of an over-worked, underpaid, middle-aged housing and immigration solicitor, battling to help marginalised and increasingly desperate clients and keep her London law centre open in the post LASPO (Legal Aid Sentencing and Punishment of Offenders ACT 2012) era.

The drama plays out on a sparse set with copious pages from legal aid application forms dangling like bureaucratic bunting overhead. 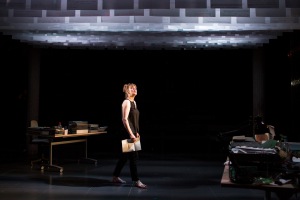 Through the stories of three troubled souls in need of legal help, the play’s sometimes laboured dialogue attempts to demonstrate the impact of the cuts on those denied access to legal advice and on the tough but caring lawyer, Gail, portrayed ably by Alexandra Galbraith.

The background is, for the most, well researched and attention to detail is good, though the occasional error or exaggeration creeps in. Contrary to the dialogue, the legal aid budget has not been cut by two-thirds, judges have not gone out on strike in protest over the cuts and struggling supermarket giant Tesco has not indicated a desire to diversify into legal services.

In seeking to get across the worthy message that the cuts are bad, the theme in the two-and-a-half- hour performance is at times hammered home rather too forcefully.

And with no countervailing voice, the play, which is sponsored by the Law Society, leaves itself open to be dismissed by the Daily Mail’s Quentin Letts as an ‘advertorial’. Particularly as the wife of the theatre’s artistic director, Mandani Younis, is a criminal defence lawyer in Bradford.

The scenes are interspersed with curious music and movement and, while the characters are somewhat caricatured, the acting is good. Although oddly, Sirine Saba plays a battered Pakistani wife with a Pukka English accent for most of the play   before switching to an Asian cadence in the scene when she is driven to seek help.

And there is a stereotypical portrayal of the medical profession’s equivalent of a fat cat lawyer – an ageing, pompous quack – that the legal aid lawyers would baulk at if they were depicted in a similar style.

Lenkiewicz, whose play Ida won best foreign language film at the recent Oscars, ultimately runs up against the problem that has hampered lawyers from getting their message across – finding the right cases to get the middle classes and Red Top readers to sit up and take notice.

The protagonists – an elderly drunken Irishman struggling to pay his rent, a father (Nicholas Bailey, best-known for playing Dr Trueman in Eastenders) denied access to his children after cheating on his wife and a Pakistani immigrant abused and enslaved by her husband and mother-in-law – are unlikely to do so.

Whether Lenkiewicz succeeds in spreading the word depends on whether the play is seen by an audience wider than legal aid lawyers and Guardian readers. I recognised a large number of the bums on seats the night I went. But there had been a discussion beforehand attended by leading legal aid lawyers, so the audience may have been unusually over-lawyered.

* The plays runs at the Bush Theatre, London until 15 August