Performers from Birmingham-based theatre group, Stan’s Café are staging performance art show, Of All the People in All the World, in Inner Temple Hall.

The biggest pile, spread across the top of the hall, represented the number of refugees around the globe who are displaced from their homes.

The figures to which the rice grains correspond are not written anywhere in the installation. Actor, Sarah Archdeacon, explains that is so that visitors can ‘experience the statistics visually and understand them in a different way’.

One person is represented by each grain of rice, and as a ready-reckoner, 6o grains of rice weighs one gram, while one tonne equates to 60 millions souls. Handily for the diligent performers, a 25kg sack would represent 1.5 million people.

As the fire started at a baker’s in Pudding Lane, and in an effort to bring the past and present together, one huge pile of rice represents the number of viewers who tuned in to watch the first episode of the seventh series of the BBC1’s Great British Bake Off (10.4 million, in case you were wondering).

The work explores themes including immigration and legal aid. One theory about the fire of London is that it was started in a bid to rid the capital of the increasing number of immigrants that people wrongly perceived were taking over London – plus ca change!

There is a pile of rice depicting the number of immigrants falsely rumoured to be marching towards the  City and other much smaller piles reflecting the number of foreigners at the time of the 1639 census – among others there were two Poles, 24 Germans and 11 Italians. 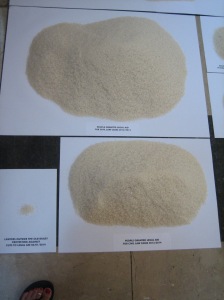 Of particular legal interest is the pile showing the number of people granted legal aid in civil cases in 2012/13, next to a pile about a third of the size, for the number in receipt of civil legal aid in 2013/14.

Two stacks reflect the number of men and women in prison in England and Wales, next to a sorry mound for the number of children under 18 detained in youth custody and a huge heap representing prisoners worldwide.

Two sad heaps next to each other represent those living in the Calais Jungle in July 2016 and the number of asylum seekers who entered the Uk in 2015.

There’s a section with piles representing the judiciary, the number of solicitors and the membership of the Criminal Bar Association, as well as the members and benchers of Inner Temple.

To mark the anniversary Temple Music Foundation has commissioned an opera, And London Burned, in recognition of the fact that the last flames of the fire were beaten out at Inner Temple, under the direction of its Royal Bencher, the King’s brother, James, Duke of York. The efforts of James and his men saved the Temple Church, where the opera will have its premiere at Temple Church on 27th October.

A piece in the Inn’s year book, penned by the former reader and now treasurer of Inner Temple, His Honour Judge Cryan, notes how as refuges from the blaze headed out of the City, Fleet Street filled with people and carts.

At the time, the Inn, he says, was thinly populated, due to the Long Vacation and fear of a return of the Great Plague of 1665, which had caused the cancellation of the ‘Summer Readings’, or lectures, for the second year running.

As Cryan recounts, the students who were in residence barred the gates of the Inn against the ‘lawless crowd’ and refusing to let anyone in ‘unless there was a barrister present’.

The Inn’s accounts show payments to its servants for watching during the fire and, Cryan notes, the Duke was permitted entrance and his efforts quelled the blaze.

*  Of All the People in All the World is in Inner Temple Hall until Sunday 4th September, 12-6pm weekdays and 12-8pm at the weekend.