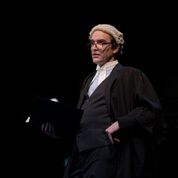 The justice system is put on trial and the foibles of criminal barristers scrutinised in Nina Raine’s new play Consent, which opened at the Dorfman Theatre in London last week.

It uses the insecurities, inadequacies and infidelities of a group of fairly unlikeable middle class Londoners and the incredulity of a working class woman who says she was raped, to critique the impersonal nature of the law and its relationship with justice, and address big issues of truth, punishment, forgiveness, class, and relationships. All of which leaves the viewer pretty exhausted.

The set is minimal, with suspended lampshades giving the feeling of being in the John Lewis lighting department.

Four of the characters are criminal barristers, who on the whole do not come off well, portraying their profession as superior, arrogant workaholics with deeply dysfunctional relationships.

The question of whether they were always like that or whether a daily diet of rape, murder and violence has corroded them, is left unanswered.

Their behaviour is keenly observed in a play that has been immaculately researched. In the programme, which includes essays from Baroness Helena Kenndy, Alex McBride and Iain Morley QC, thanks are given to Matrix barrister and clerk, Jessica Jones and Alison Scanes, 7 Bedford Row’s Rachel Darby and Daniel Coombes and Helen Greenfield at Family Law in Partnership.

The characters speak of themselves as though they were their clients. ‘I’ve been raping pensionsers … I tie them up, I fuck them, and then I nick their stuff, says Jake, played by Adam James.

Two of the friends, who actually despise each other, are pitted against each other in a rape trial. ‘I raped this woman, London lady, no witnesses, she’s a bit of a drinker, so am I, her word against mine’, says Ed (Ben Chaplin) who sees his clients as an opportunity to hone his range of impressions.

Against him is the repressed and perpetually single Tim (Pip Carter), who read classics at university. For all his book-learning, he is hopelessly awkward when it comes to explaining the trial process to the frightened and angry complainant Gayle, played with real emotion by Heather Craney.

She is baffled by the niceties of the process that mean her alleged rapist has a lawyer, but she does not, and that evidence of her mental health issues can be used to undermine her, while the defendant’s previous convictions cannot go before the jury.

Her question to the prosecutor ‘Are you on my side?’ turns to the plaintiff cry ‘But it happened to me’, when told she is merely a witness in the Crown’s case.

Later, she turns up at uninvited at Ed and Kitty’s (Anna Maxwell Martin) Christmas drinks party, indicting the ‘fucking useless’ prosecutor whom she only met five minutes before the trial. Her verdict on the system in which she watches two barristers ‘fight it out’ is that it’s a ‘fucking mess’.

Defending the process, Ed trots out the stock justification that ‘we presume innocence, because better a guilty man goes free than an innocent go to jail’.

Warming to this theme, he tells her: ‘The law’s not going to work according to your emotions, Gayle, because it’s got to be dispassionate, it’s got to be impersonal ‘.. it’s not about satisfying your personal sense of outrage, because if it was, it wouldn’t be fair and that is the whole fucking point’.

The cynic’s view of the barrister is given in two lines – Kitty tells her husband Ed ‘you tease people for a living’ and Rachel, vexed by Jake’s dishonesty, screeches ‘He says he’s a terrible liar. That’s a lie. He does it for a living’.

While Tim and Ed give a master class in the art of advocacy to their dippy actress chum Zara (Daisy Haggard), who is auditioning for the part of a criminal barrister with no home life, who speaks Mandarin and rollerblades.

They explain that advocacy is basically ‘a fight between two opposing narratives’ in which the defence’s role is to ‘pick your way through and convince the jury of one simple line’.

After the nice open questions by the crown to set the narrative, the defence ‘fuck up that narrative,’ bending perceptions to put an idea in the jury’s head.

As their oratory turns more personal and bitter, they deliver more tips:

EDWARD: Do you find my wife attractive, Tim?

EDWARD: You’re saying my wife is not attractive, am I right?

EDWARD: So she is an attractive woman, my wife, you would say, Tim?

Ed explains: ‘It’s a sort of trapdoor. You ring-fence around, locking off escape routes. And then you pull the lever. You drive an unanswerable rhetorical wedge between the answers’.

As the play goes on, the characters’ seemingly perfect lives crumble, exposing their dysfunctional relationships and hidden grievances. In their personal lives, the pedantic legal language and adversarial techniques of the courtroom prove inadequate.

When Edward is accused of marital rape, he becomes as jabbering and hesitant, under the cross examination of his friends as any defendant in the dock, proffering similar defences – ‘I thought I was showing passion’; ‘she said no a couple of times, but so did I’.

Sticking by her accusation, Kitty says: ‘It’s my truth’. To which her husband protests: ‘It’s not the truth.’

Attempting to placate the pair, their friend Jake (Adam James) observes: ‘There’s a world in which you’re both telling the truth. But that’s not the law. In court, your narratives are oil and water. They can never mix. One of you will win. And one of you will lose.’

It is Kitty’s turn to be exasperated by the law, this time the family justice system, when she is advised that the alleged rape is not relevant to residence proceedings because rape. Like pornography and prostitutes, is ‘not damaging to the child’.

Ed’s concession that ‘technically’ he raped her, poses the question of whether there can be degrees of rape.

Consent is a play very much de nos jours, touching on current polemics and trends, with wit and comedy moments, mostly of a sexual nature.

The somewhat clichéd line from Kitty that ‘You can’t legislate for human behaviour’ sums up the tension at its heart.

Consent runs until 17th May