‘Isn’t it a basic principle of our great British justice that we’re all equal before the law?’ asks the court interpreter, played by Finty Williams, in director Joe Harmston’s latest star-studded performance in aid of the Kalisher Trust.

Liberty Truck had its premier in the grand surroundings of Middle Temple Hall on Sunday evening, combining the glamour of stage and screen stars with the ugliness of racial injustice. There were star turns from Simon Callow, (who told LHB he had read all the Henry Cecil books and wanted to be a barrister, but was put off by the length of training and realised he only liked the acting part of the job) Edward Fox, Ray Fearon and Hugh Dennis, as well as a cameo performance from the former Tory attorney general, Dominic Grieve QC. 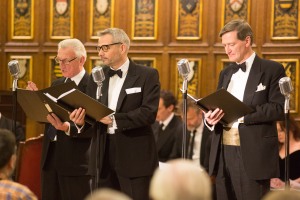 Presented in the form of a radio play, the piece, written by Laurie Slade is based on the trial, R v Tharacithio, which took place in 1945 colonial Kenya. The accused, whose name has been changed to Miriithi, (played by John Kamau) is a young African who drives the army truck, the Liberty Truck, from which the play derives its title. He is accused of the rape and murder of British servicewoman, Josephine Aston, given the name Cynthia Martin, and played by Olivia Darnley.

As Miriithi is put on trial, so too is British justice. In the colonies, the trial procedure was determined by whether the accused was black or white. The right to trial by jury was confined to Europeans. Africans and Asians were tried by a judge alone with three local assessors.

The case against the accused is based on circumstantial evidence, which the pompous and slightly inebriated prosecutor, played by Callow, insists ‘has the advantage over the evidence of living people – because living people may be mistaken or lie’.

The trial moves towards the inevitable conclusion. For a brief moment the audience thinks Muriithi might be found not guilty, after all three of the African assessors (played by Ray Fearon, Israel Oyelumade and Eugene Washington) find insufficient evidence to convict him.

But, in the colonial courts the British judges were not bound by the local assessors – whose views were merely advisory – and Muriithi is condemned to death.

Though the audience is left in no doubt, the interpreter confirms the inescapable truth that ‘if Muriithi was white, he’d have been acquitted.’ By highlighting the indefensible iniquity of the discrimination in the colonial experience of British justice, Liberty Truck seeks to shed light on contemporary racial injustice.

As Slade penned the script, Labour MP David Lammy was poised to publish his review on the treatment of, and outcomes for black, Asian and minority ethnic individuals in the criminal justice system.

Lammy’s report found that black and minority ethnic individuals still face bias, including overt discrimination, with a disproportionate number of black people being sent to prison. It reported that while black people make up 3% of population in England and Wales, they account for 12% of the prison population, and that young black people are nine times more likely to be locked up than their white peers.

Lammy also found that problems of covert and unconscious bias are becoming more apparent and that the lack of diversity (7% of judges have a black or ethnic minority background) in the judiciary affected the trust that non-white individuals had in the system – they even distrusted their own legal aid solicitors, seeing them as representing the ‘system’ rather than them.

The playwright was born and brought up in Kenya. He studied law at Oxford, was called to the bar by Lincoln’s Inn, enrolled as an advocate of the High Court of Kenya and practiced law for 25 years in Nairobi and London.

Slade’s father was the real life defence barrister portrayed in Liberty Truck, played by (Hugh Dennis) and much of the dialogue is drawn from the transcript of the trial. The case, he says, ‘haunted’ his father, who remained convinced of the innocent of the accused.

Of the play, Slade says: ‘It’s a good courtroom drama – an innocent man is wrongly accused.’ But, it is more than that. ‘Equality before the law is a cardinal principle of British justice – the Liberty Truck shows the ease with which that principle was disregarded in the heyday of the British empire – and serves as a reminder that maintaining that principle requires vigilance today,’ he says.

The play raises the issue of what reparation is owed to those who have been wronged in the colonial era. Towards the end, an exchange between the interpreter, Martha, and the defence barrister, Steadman, suggests the answer:

Martha: How many goats? For the death of that innocence? How many sheep? How many cows? The blood money. How can we ever pay – when it’s our turn to make reparation?

Steadman:   Reparation for what?

Steadman: Don’t despair. Change is coming, you know. The likes of us will be having to choose – where and with whom we stand. Do we stick with our tribe or work it out together – every race and colour? It’ll be about trust then, won’t it? Can we trust them? Can they trust us? Dear God – it’s taken judicial murder to make me to see – how – how can we win their trust? We’ve so far to go. So much to do….

Steadman tells Martha: ‘Find your own way to make that reparation.’

The play seeks to fulfil the director’s desire, not just to entertain his audience and wow them with his impressive contact book, but to challenge it to think about important contemporary issues of law and society.

‘Last year we looked at the first 100 years of women in the legal profession [in Alex Giles’ The Disappearance of Miss Bebb] and we thought it would be perfect to shift the focus to race and equality on the face of the law and in the justice system,’ says Harmston.

Considering the contemporary issues raised by Liberty Truck, he explains that while everyone in England and Wales, regardless of their ethnicity, is tried according to the same procedure, it is still largely administered by ‘a group of white, Oxbridge men who have no connection to the lives of the people before them’.

The problem, he suggests, is not that the judges are racist – indeed, he is impressed by the ‘efforts and determination of the judiciary to be fair’ – rather, he states ‘it is about visible representation’.

Harmston is concerned that legal aid cuts and the cost of legal education creates a ‘huge danger’ of the profession taking a backward step on diversity just as change was happening.

‘That’s why charities like the Kalisher Trust are so important. We can’t change everything, but we can make a small contribution,’ he says.

More generally, he is keen to guard against the ‘echo chamber’ of social media, in which it has become ‘easier to avoid engaging with contrary opinions and languish in unchallenged righteous indignation’.

Theatre, he says can help: ‘Great theatre, like advocacy, is a conversation. Drama and law rely on the dynamic power of questions. The best evenings in the theatre are not the ones which confirm everything the audience expected when they walked in; they are the ones which leave people arguing about what they have experienced as they walk out.’

He hopes Liberty Truck will begin a conversation that contributes to ‘our finding ways, however small to make the world we live and work in a more equal and fair place’ — a worthy ambition for a play that definitely deserves a wider audience and has all the makings of a Merchant Ivory-style film, a la A Passage to India.